AVIAN gets pied in support of Relay for Life

LEXINGTON PARK, Md. – Some celebrate March 14th, often referred to as Pi-Day, by eating delicious, flaky baked pies with airy whipped toppings. At AVIAN, we smash them in each other’s faces to raise money for cancer research.

Last week, a total of seven AVIAN teammates, including the founder and president of the company, were pied in the face as part of a St. Mary’s County Relay for Life fundraising event.

Every $314.00 donated to its relay team resulted in another pie to the face.

On one of Southern Maryland’s first spring-like days, where temperatures peaked in the low-70’s, AVIAN’s President, Kevin Switick; its Chief Operating Officer and Founder, Jeff Sherman and its Vice President for Product Acquisition and Support, Bill Schaefer, all lined up for a smashing good time.

“Five, four, three, two, one,” the group of excited AVIAN spectators chanted and then burst with excitement as the pies met their target faces.

“I knew provoking the company with some friendly email banter before March 14th would doom me,” Switick said.

AVIAN has employees located throughout the United States, and although this was a fundraiser for its Maryland Relay for Life event, the donations poured in from regions near and far.

“So many donations came in from our Panama City Beach, Florida office that three teammates were pied there in solidarity!” Switick said. “We even had a remote employee in Pennsylvania pie himself as part of the challenge. It was so great to see so much participation.” 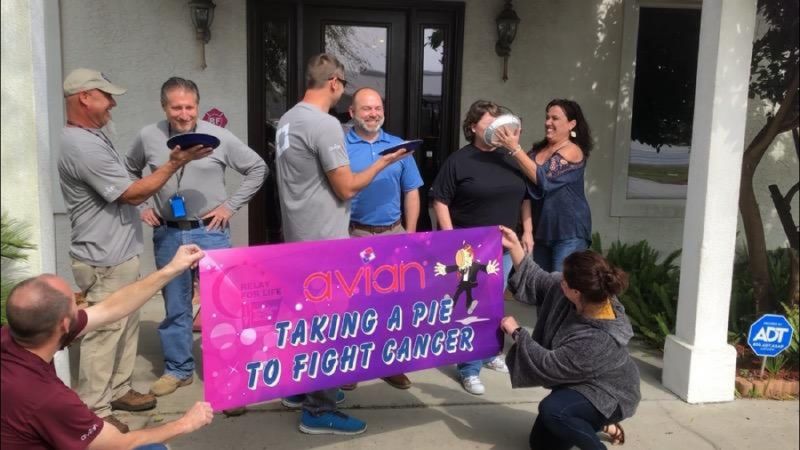 In just under one week, AVIAN’s team raised $1,700 for the American Cancer Society. The team has a goal of raising at least $4,000 this year and is well on its way. There are several other fundraising events scheduled leading up to the relay event on June 1, 2019.

“Cancer knows no boundaries. It has affected us deeply here at AVIAN,” Switick said. “We’ve lost two teammates in the past few years and are standing strong with several others as they bravely battle this awful disease. We have to find a cure…so we’re doing what we can to help.”

AVIAN has supported Relay for Life and the American Cancer Society for nearly eight years. In the past, AVIAN’s team has raised upwards of $40,000.

For information about the St. Mary’s County Relay for Life event and/or how to donate to AVIAN’s team, please visit: http://main.acsevents.org/goto/AVIANCelebratesLife

(In article photo) Three AVIAN teammates at their Thomas Drive office received a pie in the face on Friday, March 15 as part of a Pi-Day fundraiser in support of the American Cancer Society Relay for Life. From left to right, Chris Sewell, Dan Lucarell, Greg Roth, Geoff McConnell, Vicky Perkins, Sandy Means.